Poor Communication Can Cost an Arm and a Leg or in Some Cases, a Foot.

Are you a good communicator? I think most of us would say that we are pretty decent, but could probably improve our communication skills. How does poor communication affect claims in correctional healthcare? Here’s an example and a few statistics.

This is a true story. A 37 year old male was arrested and put in jail for public intoxication. During the intake screening they found that he had a history of seizure disorder and took daily medication for it. He had a seizure and fell while in the “drunk tank” and injured his ankle. He was transported to the emergency room at the local hospital. An x-ray of his leg showed he had a tibia fracture. Surgery was recommended, but somehow the on-call physician assistant for the jail missed that request or did not understand it (OOPS!) and told the emergency room to splint the ankle and returned the inmate to the jail.  Over the weekend the inmate continued severe drug withdrawal. He was treated for the withdrawal and walked around on his ankle without the splint on. The weekend nurse failed to tell the on-call, part-time physician about the ankle issue.

The next week, the inmate was transported to court in shackles and then was unshackled at night. The last night he was in jail, the custody officer realized that the inmate’s bone was protruding and the area around it was black.  The custody officials did not inform the medical unit at the jail of the issue. Charges against the inmate were dropped the next day and he was released on crutches. Later that night he fell in the street and was admitted to the hospital and had to have his foot amputated because of the infection.

JCAHO reports that over 60% of sentinel events can be attributed to poor communication. 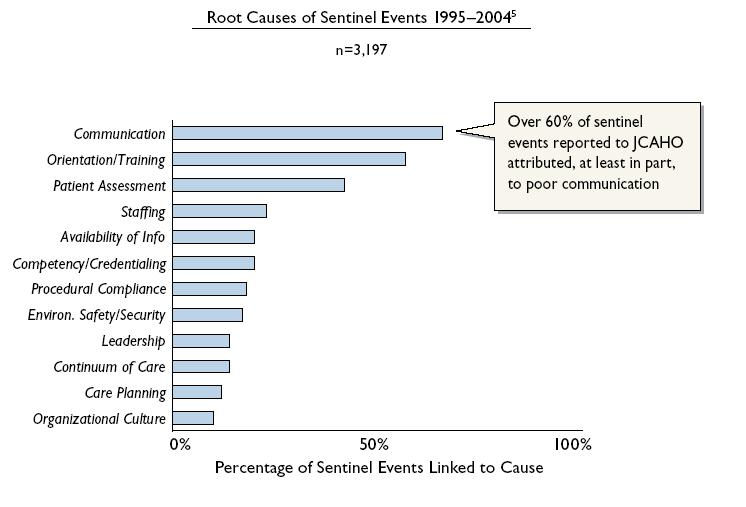 Taken from “A Case for Strengthening Nurse-Physician Relations” The Advisory Board Company, Washington, D.C.

The primary areas of communication problems in correctional healthcare tend to be handoffs across organizations, outside services (labs, diagnostics, etc.), specialty care and poor process. Failure to properly manage this communication can have big consequences.  In the case above, a lot of things went wrong.  The on-call Physician Assistant did not properly communicate to the medical unit at the jail with information they received from the hospital. The LPN did not tell the on-call Medical Doctor about the physical injury over the weekend call. The jail custody staff did not know about the leg injury until they returned from the court hearing and then just sent him on his way when they discovered it.  Basically, every communication point went wrong in this case.

Lorry Schoenly, a healthcare risk management consultant with OmniSure Consulting group, says that there are four best practices that can improve clinical communication.

Using the SBAR communication method and other tactics, Lorry and OmniSure are able to help our correctional clients be better communicators which leads to better clinical outcomes and reduced incidents of medical malpractice.

In case you are wondering, the above case paid out over $2MM in malpractice, punitive damages and deliberate indifference.

No comments yet. You should be kind and add one!

The comments are closed.